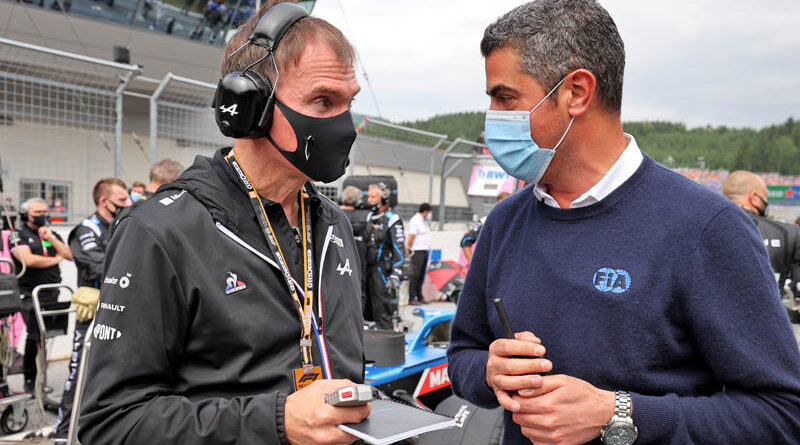 Without naming names, Red Bull boss, Christian Horner claims that Michael Masi was “bullied” out of his role as race director.

In the midst of the opening pre-season test, Christian Horner and Toto Wolff both agreed that it was time to move on from the events of Abu Dhabi.

“Maybe we share a difference of opinion over Abu Dhabi,” said the Red Bull boss, “but that’s done and dusted and all focus is very much now on 2022.

“What you did see last year was a fantastic competition from the first race to the last race,” he added, “and I think that’s been a key part of Formula 1’s revival in popularity.”

“It got fierce at times, and, and brutal,” agreed Wolff, “but there is a lot at stake. It’s a Formula 1 world championship and there is the fighting on track and the fighting off track for advantages.

“I agree with Christian,” he continued, “we need to move on. There’s been so much to talk about Abu Dhabi that it came to a point that it is really damaging for all of us stakeholders of Formula 1.

“We’ve closed the chapter and moved on, now it’s about 2022. The game is on again, all points to zero, and new opportunity and new risks.”

Yes just eight days later, the Mercedes boss was claiming that (FIA race director) Michael Masi had been “turned” by Red Bull over the course of the 2021 season, even suggesting the Australian enjoyed a “bromance” with the Austrian team’s sporting director, Jonathan Wheatley.

By its very definition, “turned” suggests that Masi was deliberately persuaded to work in Red Bull’s favour and against Mercedes, thereby implying that Abu Dhabi was a deliberate, almost premeditated act, and could therefore lead to legal action, if not by the German team by the Australian himself.

Now, like Wolff clearly spurred on by the media, Horner has revealed that in reality he is not prepared to “move on” either, having claimed that Masi was bullied out of his role.

“Michael did make mistakes and it was frustrating,” he tells BBC Sport, “but you have to look at the role that he was in and the tools that he had at his disposal.

“You can’t just place the blame on Michael. It’s unfair to do that,” he adds.

“We were on the receiving end of many of Michael’s errors,” claims Horner. “But he is in a high-pressure role in a high-pressure sport. But what it is unforgivable is the trolling, the abuse online, the death threats that he and his family had. That absolutely cannot be condoned in any way. That has nothing to do with the sport. It’s just out-and-out bullying and I would not accept that in any way within our organisation.

“That’s why I spoke up for Michael because I felt that he had not had any support. He had not had any backing. That he’d been hung out to dry and that there was this concerted campaign that was very passive-aggressively focused against him. I will always stand up for someone who is being bullied. Bullying is not acceptable.

“I don’t believe the rules were not followed correctly,” he says of that fateful decision in the final stages of the Abu Dhabi Grand Prix. “I think that they were applied perhaps differently to how they had been before by not allowing every single car to un-lap. But if (the stewards) felt the rules were not applied correctly, they wouldn’t have declared the result.”

Of course, over the course of the season both teams were seen (and heard) vigorously lobbying the race director, a practice that has now been outlawed.

“You’ve got to report the facts,” says Horner of Abu Dhabi. “Who was the first to call Michael? It wasn’t me. I’m only responding to the pressure being applied on him that I can hear in my ear from a rival team. It’s my job as the principal of the team that I represent to defend it.

“Looking at that incident, it wasn’t a big crash and the driver was not injured,” he says of the Nicholas Latifi incident that kick-started the controversy. “The car was near an exit and it always looked the likelihood that would be cleared up, and there would have been no problem releasing all seven cars rather than just five.

“If they’d have released all seven them, would you have had a problem with it?” he adds. “It would make no difference to the outcome of the championship if they’d got all seven out of the way. The only mistake you could argue he made was not releasing the back two cars, that he could’ve done easily, but it had no material effect on the race.”

Of course, the big question, asked by Pitpass in the hours after the race, wasn’t so much why Masi made the call that he did, but rather who was pulling his strings.

At a time F1 is all but looking down the back of the sofa for more cash, signing deals left right and centre, warning Netflix that it must up its game and provide more “value” even though the streaming giant is the driving force behind the sport’s impressive rise in popularity, one has to seriously consider who gained the most from Masi controversial decision, and it certainly wasn’t the Australian.

“It would have been the worst possible finish to what had been a magnificent season,” admits Horner, in terms of the race ending behind the safety car. “When you look at the intensity of it, for it to end under a safety car after a lame accident would have been shocking.

“The production director of Netflix was not sitting next to Michael Masi when he was making that decision,” he adds. “F1 is still a sport, but sport is an entertainment. And one could argue that there have been more people talking about Formula 1 in the past two and a half months when, traditionally, it would have been in hibernation.

“The viewing figures have never been bigger,” he continues. “Every promoter is sold out. Silverstone are trying to accommodate more seats and grandstand places. There’s never been more competition to host a Grand Prix. So, um, is it all that bad?”