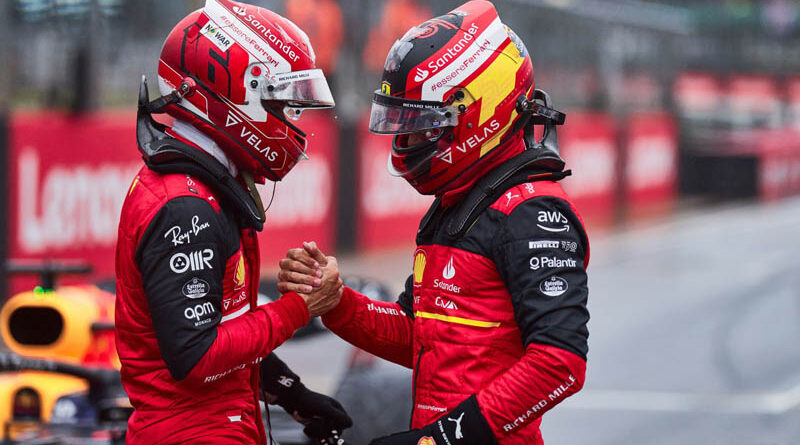 Almost a week later, other than why Boris Johnson left it so long to take the hint, one of life’s other great mysteries remains why didn’t Ferrari pit Charles Leclerc under the safety car last Sunday.

Though Mattia Binotto has explained the decision, few give it credence, least of all, no doubt, Charles Leclerc.

Whether the decision cost him victory is up for debate, but it almost certainly cost him a podium, and as he battles for the title one can understand the Monegasque’s frustration.

In the moments after the race, while Carlos Sainz, Sergio Perez and Lewis Hamilton congratulated one another, Leclerc was seen huddled in deep conversation with Mattia Binotto, and though one couldn’t read their lips, the Italian’s finger wagging gave the impression that all was not well.

Since then, particularly in Italy, the media has been speculating on a possible rift between the driver and his team, in many ways understandable what with the strategic errors he has suffered this year combined with so-so reliability.

However, the youngster, who left Melbourne with a commanding lead in the championship, but is now third, and falling into the clutches of his teammate and the Mercedes pair, insists all is well.

Asked about a breakdown in his relationship with the Maranello outfit, Leclerc was adamant.

“This is really untrue,” he replied. “And I wish I didn’t have to get into this, because this is the exact question I’ve got everywhere else. I wish I wouldn’t need to fight for these types of things.

“We are extremely united,” he continued. “Is there a disappointment after the last race because we finished first and fourth? Yes, there was. Were we very, very happy that Carlos won his first race? Yes, we were honestly.

“But obviously, before the safety car, you are first and second and you finish the race first and fourth, so there’s some kind of disappointment too. But there’s not any kind of division inside the team, that’s for sure.”

Confirming that he has since met up with Binotto for a private dinner in Monaco, Leclerc admits that the previous exchange at Silverstone was ‘heated’.

“He was first quite angry with me after Silverstone, because he saw me extremely down, which obviously he understood,” said the youngster. “But he just wanted to make sure that I was okay, and that I realised that I had done also an amazing job considering the situation I found myself in after the safety car.

“Then in Monaco, this is something that we usually do. He came to Monaco, because the last five races have been quite hard on me. And I just wanted to stay home, disconnect a bit from everything, to be fully 100 percent for this weekend.”

Seemingly, Ferrari has acknowledged that it could have done better, something we – and various drivers – have heard all too often over the years, but Leclerc is confident the team will learn from its mistakes.

“For me personally, there’s nothing I could have done differently in a way,” he said “As a team, I think we have changed already a few things, just in the way of the communication throughout the race to be ready in that particular moment.

“Once a safety car is out, then you need to take a decision, and if you’re not ready for that, then it is tricky. So yeah, as a team, we have changed a few things. And I won’t go too much into detail.”