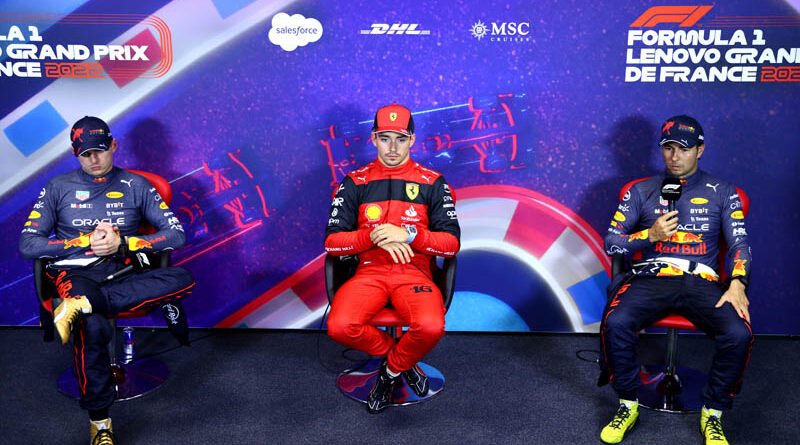 Charles Leclerc, pole position! That looked like an absolutely brilliant lap. How was it for you? Your 16th career pole, your seventh of the season? How are you feeling?
Charles Leclerc: It’s a great lap. I’ve struggled all weekend to put a lap together and I managed to put it, but I have to say that I also had the help of Carlos. And that was amazing teamwork, because without Carlos it would have been much more close. So yeah, a huge thanks to Carlos and I hope that he can join us back in the fight for the win tomorrow.

Yeah, because it looked as if it was a threat from Red Bull – you thought that was going to be for them. Did you feel that way going into qualifying?
CL: Yes. But after Q1 I think I was very surprised by the pace we had, I mean, also in Q2, we were very strong. So somehow, we managed to turn that around for qualifying. But it’s a good surprise.

It is. What about tomorrow, the race, you’ve got the pole position, how does the car feel for the race itself?
CL: It feels good, it feels good. But again, it’s difficult to understand what the Red Bull guys have done yesterday, because there was loads of difference in terms of lap time. So let’s see how it goes.

Brilliant. Well done. Charles Leclerc, pole position! Okay, Max, second, a bit disappointed? Because it looked as if this was in the bag for you guys going into qualifying. How do you feel about what happened?
Max Verstappen: Well, FP3 is not qualifying, clearly. But overall, I think we were lacking a bit in qualifying, just general grip. So it was a bit more tricky than I think I would have hoped. But overall, I think we still have a decent race car. And hopefully, of course, tomorrow will come to our favour, I mean, we are quick on the straight, so hopefully, we can use that tomorrow.

So you’re saying you’re going to be more confident going into the race tomorrow, because you’re going to it’s going to suit it more…
MV: Well, we’ll find out tomorrow. I mean, it’s also going to be a bit warmer, but clearly they’ve been really quick again.

Sergio, how are you doing? How are you feeling after that? Disappointed? Not quite what you expected? Because you look quite good going into qualifying.
Sergio Perez: Yeah, it’s been a good recovery. I’ve been nowhere the whole weekend, to be honest. I’ve been struggling a lot. I think it probably has been my worst weekend up to qualifying really and finally we managed to recover well in Quali.

OK, well, we know you race very, very well. Is that going to be where we’re going to see Sergio Perez in a comfortable place?
SP: Yeah, that definitely will be the target for tomorrow. Try to recover, try to beat those red cars.

It’s going to be tough, though, isn’t it? They look very quick.
SP: They were very strong today, certainly.

A very warm welcome to the top three qualifiers for the 2022 FIA Formula 1 French Grand Prix. Starting in third place will be Sergio Perez. In second place, Max Verstappen. And taking the 16th pole position of his Formula 1 career and his seventh of this 2022 campaign our polesitter Charles Leclerc. Charles, many congratulations, a very impressive qualifying session by you. How pleased were you with that final lap?
CL: I was very happy. I mean, overall the weekend has been quite difficult for me. I struggled to find the right balance with the car, the right driving style, also it’s very, very warm, so whenever you get a small snap or whatsoever then the rest of the lap is compromised. So it was very, very tricky, but I was very happy with my last lap. And obviously I got the help from Carlos also, that helped us for that lap too. So great teamwork and a great lap.

Can you tell us a little bit more about the tow from Carlos? How difficult is it to choreograph something like that?
CL: Well, I mean, it’s quite tricky to get it exactly right. I think the first lap, maybe we were a bit too close in eight, nine, and so I lost a little bit there. And I just drove not in the best way possible. And then in the second lap, we adapted that. And then it was better and that was the lap. So yeah, we did a good job communication-wise and also Carlos helping me was amazing.

Now Charles, this race has been won from pole position since Formula 1 returned here to Paul Ricard in 2018. As statistics go, that’s an encouraging one for you but what sort of a fight are you expecting tomorrow?
CL: I think it will be tricky, because yeah, the Red Bull guys seem to be very, very quick in the race simulations they’ve done yesterday. So we’ve worked a little bit on the car for the race. Hopefully, it will go better for us tomorrow. But tyre management will be a thing. We were good in Austria, we struggled a bit more yesterday, but I think we did a significant step up in performance since yesterday so hopefully we can show that tomorrow in the race.

Very well done to you, Max coming to you now. Great job by you as well, Was a 31.1 what you were expecting prior to the session?
MV: I didn’t think about that, what to expect from it in terms of lap times. I think overall, you know, with the conditions out there, it’s very difficult to really know what’s going to happen. I mean, it’s so hot out there. And also the tyres, to get them in the right window is very tough, already the whole weekend. But qualifying for myself was a bit of a struggle to get the right balance to be honest. Yeah, just not having that grip I want to have, especially in Q3, you know, when you really want to push it, but maybe it’s just related to the track layout, the surface, together with the heat, that it just doesn’t really, whatever, suit the car, suit my suit my driving style, I don’t know. But I think, overall, to be second I think it’s still pretty good.

Max, you say it’s difficult to get the tyres in the right window. How difficult was it to keep them alive for the whole lap?
MV: Yeah, that’s the thing, right? I mean, you can start probably a bit warmer, but then of course, they will be hurting more throughout the lap. But finding the right trade-off for not being too cold of course, it’s tough.

Charles just mentioned the tow that he got from his team-mate. You’re 0.3 of a second behind him? Is that difference purely from the tow or was there more to it?
MV: I don’t think it’s 0.3. Of course, it’s quite a bit. Maybe Charles can tell you more, exactly how much it is. But overall, I just look at myself, of course, you know, what we have done better. And I think overall, that final lap was, first of all, not a clean lap, just by being on the limit or trying to find that limit I just had like two moments, which cost me a bit of lap time. Those things, we have to figure out why they happen and how can we make it more predictable, let’s say it like that. But I mean, we still have two cars in the top three. So that’s good.

And how is the long run pace of the car as we look ahead to the race?
MV: Yeah, it’s alright. But I mean, we have to be quick also tomorrow and it’s going to be probably even warmer than today. So it will be even harder on the tyres. And to keep them alive is going to be key. I mean, you can have good start pace but it’s also about keeping them alive.

Checo, great job as well. Your fifth top three start of the season. First up, talk us through that final lap?
SP: Yeah, I managed to improve a few tenths on my final lap. I think the whole weekend has been very difficult for me. I’ve been struggling a lot with the balance throughout the weekend. I was certainly making good progress through qualifying and I think my Q3 lap, there was a bit in it still, but not much more. So super pleased to be P3 and hopefully our race pace will be stronger for tomorrow and we can be in the fight for the victory.

What did you change to improve the balance?
SP: Well, we’ve been playing around with the set-up quite a bit, you know, since the beginning of the weekend. It’s very, very hot and somehow I’ve been struggling a lot, you know, it has been probably my worst we can up to now in terms of preparation for qualifying. So it’s a decent result to pull it back.

So, in terms of the prep being bad, does that mean that your race prep has not been ideal as well?
SP: It hasn’t been ideal. But with the changes we’ve done today, I think it’s something that is going to help us and something that I’m more comfortable for the race tomorrow.

And we’re going to have a very hot race tomorrow. Just tell us a little bit about the physical nature of it for the drivers. How tough is it going to be?
SP: Yeah, certainly it’s going be a tough one. The circuit is not very demanding, but obviously there’s a lot of heat. So yeah, it’s going to be very warm. Probably not so much for a Mexican but certainly it will be very warm.

Check out our Saturday gallery from Le Castellet here.