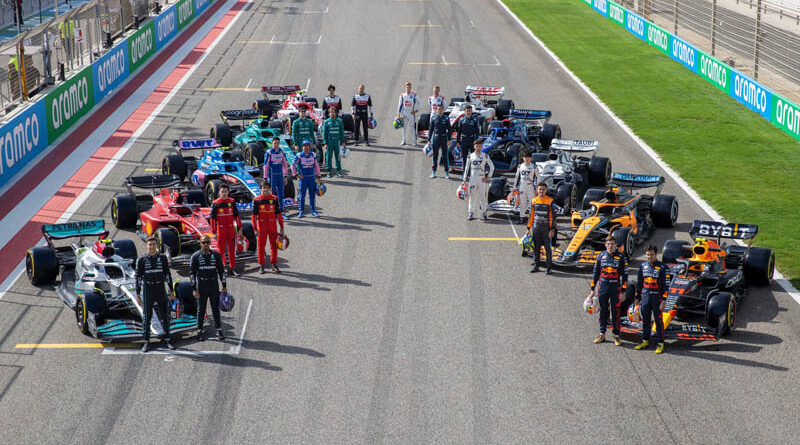 While today’s race has been given the go-ahead, F1 drivers are keen to discuss the future of the Saudi Arabian Grand Prix.

Over the years, Pitpass has frequently been critical of the Grand Prix Drivers’ Association for its seeming lack of backbone.

Time and again, rules have been introduced, changes made, without any consultation with the ‘stars of the show’, the drivers.

Occasionally the GPDA will issue a brief statement, but much like the comments at press conferences they are anodyne, for fear of offending team bosses, sponsors or the sport’s stakeholders.

Yesterday, despite the objections of a number of drivers, including Lewis Hamilton according to reports, the GPDA gave its backing for the Saudi Arabian Grand Prix to go ahead following Friday’s terrorist attack on a local oil depot, a depot owned by Aramco, title sponsor of the Aston Martin team and, since 2020, a global sponsorship partner of F1 itself.

Other than branding at “most races”, the deal gives the Saudi oil giant title sponsorship of a number of races.

At the time of the announcement of the deal there was a public outcry, as Aramco, of which the government of Saudi Arabia is a majority shareholder, has been involved in various controversies, including human rights abuses, the ‘strong-arming’ of investors and its organisational culture.

Despite the GPDA giving the thumbs up to today’s race, moving forwards the drivers wish to discuss the future of the event.

“I don’t want to go too much into details on this subject now, but it’s definitely a discussion that we should have after this race,” said Charles Leclerc. Once everything calms down, we’ll look back at it, and then we’ll see.”

“I agree,” added Ferrari teammate, Carlos Sainz. “I think there will need to be discussions after this race, because clearly what has happened in the last 24 hours is definitely a point of discussion and consideration that we need to take going into the future.”

“I think the clarity was needed, the conversation was certainly needed,” said GPDA director, George Russell. “I think it was good, we were all standing united, firstly, between all the drivers, and then together with Formula One, and ultimately, we trust in Stefano, Formula One as a whole. And, you know, we wouldn’t be here if we didn’t think it was right to be here.

“Obviously, there’s going to need some clarity after this race weekend as to where we go from here,” he added. “But from what I understand, everything was under control in this specific region, and what happens outside of the region, you cannot control. I don’t know what to say, really.”

“It’s something that we have to, let’s say, keep assessing,” said Daniel Ricciardo. “We were very much part of the discussion and it wasn’t a one-sided discussion.

“That’s probably the best way to say it. We were very much involved in what the outcome ended up being, which is what we all agreed on.”

“We drivers, we were all concerned if it’s safe for all of us to be here racing,” said Valtteri Bottas, “we got decent explanation on things. Also we went through all the options like, ‘What if we don’t race’, for example, because the teams would still have to stayed here for a couple of days packing stuff, and it’s also not like we can create some new fights so that everyone can get home.

“So we’re all already here, let’s finish the race. They’ve increased the security and their defence system, so everyone agreed we might as well do the race and hope for the best.”

With F1 boss Stefano Domenicali admitting the desire to further expand the calendar, the Italian admitting the possibility of as many as 30 races, the fact is that only certain countries will be able to provide the sort of hosting fees the sport is seeking.

It is a matter of fact that as the west continues its gradual decline, it will be the rising nations, those with questionable attitudes to human rights and the like, but with seemingly bottomless pockets, that will rise to the occasion.

As a late, great doctor friend of ours used to say… follow the money.

Check out our Saturday gallery from Jeddah, here.