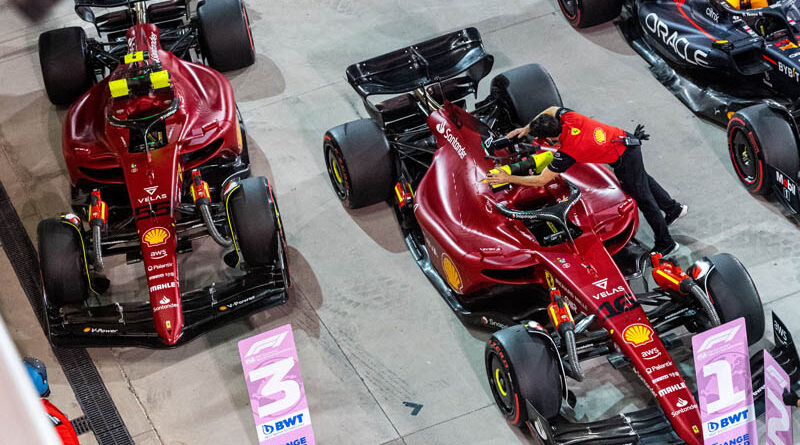 Scuderia Ferrari produced a brilliant team result in qualifying for the Bahrain Grand Prix, the opening round of the 2022 season. Charles Leclerc steered his F1-75 to pole position, while Carlos Sainz was third quickest, just over a tenth of a second behind his team-mate and only six thousandths off second placed Max Verstappen. This was Leclerc’s tenth career pole and Ferrari’s 231st, its first since Charles was also quickest in qualifying in Baku in 2021.

The team did an excellent job of managing all the phases of qualifying, in assessing the gap to its opponents and opting to also run used Soft tyres in the early stages, which meant that Charles and Carlos had saved two new sets of Softs. In the end, there was a three-way fight for pole: Sainz was quickest after his first run with a 1’30″687, 44 thousandths up on Leclerc (1’30″731) and 56 on Max Verstappen (1’30″743). But on his last run, the Monegasque excelled himself, stopping the clocks in 1’30″558, against the Dutchman’s 1’30″681 to go quickest. However, Carlos was unable to improve, because of a less than perfect second sector.

Tomorrow’s race gets underway at 18 local (16 CET) and it looks like being as close a battle as today’s qualifying. Carlos will be able to count on the advantage of starting from the clean side of the track and he too will therefore be able to make the most of the situation.

Charles Leclerc: We knew that it was just a matter of time before we were back in the mix and I’d like to thank our whole team for the hard work that everyone has done to put our car back where it belongs. We are all happy with today’s result, but at the same time we are aware that we can’t relax and have to keep pushing because our competitors are strong.

We focused on short runs so far in the weekend in preparation for qualifying and did a lot of high fuel laps during testing, so we have gotten to know the car in different situations and it feels good.

The trickiest part today was putting the tyres in the right window, but at the end I put it all together and it feels really good to be back on pole.

Carlos Sainz: It’s not been an easy weekend for me up until Quali, but we managed to put together a very strong performance this afternoon. Fighting for pole until the very last attempt is good news. The gap at the top has been super narrow all session, so overall I cannot be too disappointed with this first qualifying of the year. Congrats to Charles for this result and to the entire team for giving us such a competitive car. It’s a promising start!

Looking ahead to the race, I think there’s still a bit of work to do from what we saw during the long runs in practice, but we will definitely give our maximum. I can’t wait to race tomorrow.

Mattia Binotto: We are extremely pleased with today’s performance: we were convinced the potential was there to do well and the fact that both our drivers were in the fight for pole says a lot about the strength of our package – the car, the drivers and everyone who gives their all every day both at the track and back in Maranello.

This pole position is a reward for all the hard work of the entire team and it’s even more important when one considers where we were two years ago.

We have always said that to excel against such strong opponents we have to be perfect and I think, today, as a team we were very good. I know we have the best driver pairing and I feel that was shown to be the case today.

Check out our Saturday gallery from Bahrain, here.