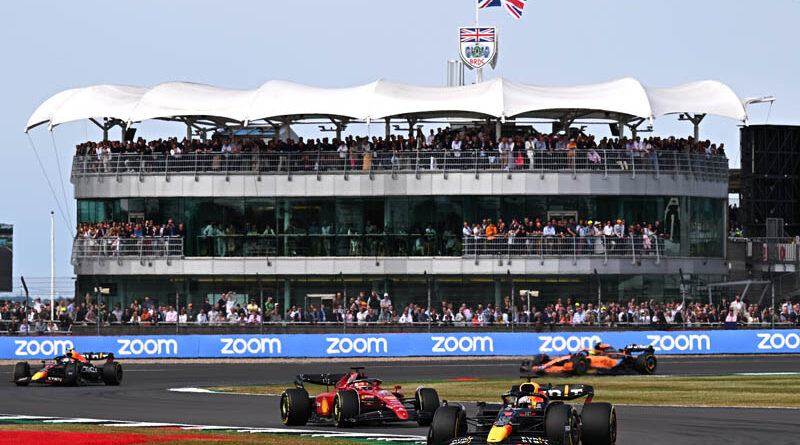 It has been revealed that a front wing endplate from one of the AlphaTauris is what ended Max Verstappen’s hopes of a Silverstone victory.

Having just taken the lead from Carlos Sainz, the world champion suddenly began to slow on the Hangar Straight, much to the delight of the partisan crowd.

Fearing a puncture the Dutchman dived into the pits, however on rejoining the race his car felt no better.

Arguing that he had “no rear and front now”, that the car was “100% broken” and that it was like “driving on ice”, Verstappen was repeatedly assured that there was no technical issue, that the car was safe and that any loss of performance was down to bodywork damage incurred in his earlier clash with Charles Leclerc.

Further pit stops didn’t improve the situation – or the Dutchman’s mood – and having lost out to Sebastian Vettel, and Esteban Ocon, and looking like dropping outside the points, the world champion benefitted from the Frenchman’s subsequent retirement and the safety car that followed. However, he was put under intense pressure by Mick Schumacher right up until the final corner.

Speaking at race end, team boss Christian Horner revealed that Verstappen’s issue was a front wing endplate that had fallen off in the incident involving the two AlphaTauri drivers.

“When I jumped out of the car I had a look under the floor and the whole left hand side underneath is completely ruptured,” said Verstappen at race end.

“Once I got into the lead after Carlos made a mistake, like a few corners later in turn 5 there was a piece of carbon,” he explained. “By the time I was there it was on the racing line, I could not drastically move left or right, so I tried to just hit it head on. It just went into my floor and it just destroyed everything.

“It felt like a puncture because suddenly I had no balance, a lot of oversteer, like the car was hopping a lot. Then of course we decided to box, and even after that the car was just completely a handful to drive.

“The tough bit was just to try and find a nice aero balance,” he admitted. “Because of the massive loss of mainly rear load, to try and back off the front wing, but of course when you do that you lose overall load as well.

“That wasn’t ideal on the hard tyre set, so for the last set we went up again to try and give a bit more performance in low speed. It was very tough, but at the end I think seventh place was still a good result with the damage I had.”

Asked about the comments from his engineer, Gian Piero Lambiase, Verstappen said: “As soon as GP says it’s safe to drive, I mean, he would never put me in danger. When they tell me it’s bodywork damage, and we can see the losses in downforce, then it’s fine. I know there is damage, but if there is like suspension damage it’s a different story. Luckily it wasn’t that.”

Check out our Sunday gallery from Silverstone here.